Adventures in (NOT) Finding a Gym

So I am going into another theater production.  It’s Rocky Horror this time and I have been cast as one of the Magenta’s in a rotating cast of three.  Don’t ask, it’s too long to explain.
Knowing how horribly out of shape I am and how I will have to be wearing some sort of maids outfit onstage, I got it in my head that I was going to join a gym!  I was going to finally start working out damn it!
I did a little research on nationwide gyms that would have a branch where my mom lives in Maine, since I will be going there for two weeks in October before I debut in the show.  Anytime Fitness seemed to be the winner.  I was hoping we had a Planet Fitness near where I live but we don’t.  I got really excited that Anytime Fitness was 24 hours and all over the country and the website made it sound like they had these great shower facilities and locker rooms, and there was a branch three blocks from the theater!  It seemed perfect.
So I walked my happy ass into the location Saturday before rehearsal and got a tour.  The facility itself was very nice!  Very clean and hardly anyone in there on a Saturday afternoon.  Lots of machines and weight stations.  It was looking promising.  Until he told me that they had ONE shower and no locker room.  I was still willing to join but when he told me the shortest contract term was 12 months and there was a 99 dollar penalty fee for breaking it early, my heart sank.  I was hoping for something more short term since the play would be over in November.
This, among other reasons kept me from joining.
When I got home that night I hopped on the interwebs and started researching again.  There is a gym that is native to California but has several locations here called In Shape.  The website made it look amazing!  They had everything, even a pool!
I signed up for a free 7 day trial that doesn’t start until you walk in and activate it and spoke to one of my cast mates excitedly about it the next day.  She was sad to inform me that she had also done the trial previously and found the clientele at this location to be obnoxious and snooty and the staff not very knowledgeable.  In further talking with other people over the course of the last 24 hours, that opinion was backed up multiple times.  I also checked Yelp and saw some scary reviews about the cleanliness.
I checked on other gyms in the area but I just keep hitting a brick wall.
Plus, if I were to be completely candid, I’m not sure how often I would talk myself out of going.  I know myself pretty well after 43 years and I can already hear the excuses clouding my brain of why I can’t go on certain nights.
So I thought about it a lot and I realized that I have a lot of tools at home that I could utilize to start myself in the direction of working out.  I have a crap ton of work out DVD’s that I’ve never even touched!  I have a Tony Little Gazelle that is currently serving as a clothes rack and I have a mini stair stepper in the upper house gathering dust.
What I really would want to go to the gym for would be a treadmill.
So what if I worked out at home?  And if, AND ONLY IF, I did it on a consistent basis, what if I plunked down the money I would have spend on gym dues into a savings account to purchase a treadmill??  It would take a little while to get the one I want because I have expensive taste, but isn’t that the point of the dangling carrot??
My biggest problem with working out at home is that once I get home from work and my butt hits the couch, I ain’t moving.  It’s a proven fact. So tonight I decided to try and jedi mind trick myself.  I got home from work and said hello to the dogs, before putting on my gym clothes.  I kept saying to myself: “I am not at home, I am at the gym.”  I put a work out DVD on the TV and proceeded to do a half an hour of fat burning cardio.  This is the first time I have deliberately (not choreography for a show) worked out in at least a year, possibly two.  I felt AMAZING afterwards.  Still do.

If I can keep up this mindset, I think I might be on to something.  I hope so. 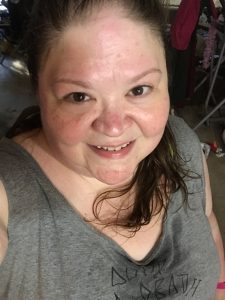