Things I Am Grateful For

I’ve been in the grips of a pretty bad depression for a while now. I have good days and bad days, but overall it’s been pretty bad for the last month or two. I’m on my way out of it now *knocks wood* and this morning actually felt kinda joyful.
I like the days when I can appreciate everything I have and the people in my life. Today is one of those days.
Having said that, I would like to take the time to be grateful. I want to put it out there so I can read it again next time the darkness comes for me again.

I truly live in paradise. I live in a very small community in a small town on a beautiful piece of property along the river. We are fairly secluded and in this day and age of noise and gadgets and all the distractions that life can bring along, there is a great amount of joy to be found just sitting on the back porch listening to the river ripple along beside you.
Of course it doesn’t come without a price. During drought season there is always danger of a fire in the heavily wooded area that is our backyard. Rainy season there is always a risk of flooding as the river is so close. In the last two years we have been in very close danger of both, thankfully everything worked out okay. *knocks wood again* 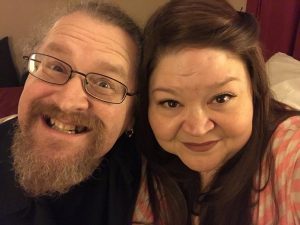 I am married to a very supportive and patient man. I know it takes a special kind of person to put up with my crazy and he has done it for the last 18 years with minimal complaints. *knocks wood yet again* He makes me laugh on a daily basis and he calms me when I get upset. He encourages me to talk things out when I start to stuff my feelings down and was a godsend in helping me get over my bulimia.
I honestly don’t know where I would be in my life if I hadn’t met him. I don’t even want to imagine it. Marriage is never all sunshine and roses and of course we have our ups and downs like any other couple. But for this gal that said she was never getting married and never had a relationship longer than 6 months before meeting him, it has turned out pretty well.

I am a hermit. I’m putting that out there so you will know what a frustrating friend I must be. I will make plans with you from the comfort of my own house and then when it comes time to have those actual plans, I will do my best to back out on you. It’s not because I don’t want to hang out with you. Not at all. In fact, in all reality I probably miss the hell out of you and to see you would do me a world of good, but I don’t want to leave my house.
I am well aware that this is not healthy and it is getting worse over the last couple of years. I know that my friends get upset when I do this and I have certain friends that just don’t put up with it. They pull the tough love because they know in the end that getting out of the house and hanging out is what will make me feel better. They don’t let me weasel out of our dates unless of course it is an actual emergency. I appreciate that. I also appreciate the friends that ask me to do something knowing full well that I will back out and they let me. It is still nice to be asked and included even though I know, and they know that I won’t go.
The reason I preface all of this like I am is to illustrate the fact that I have the best friends in the world. A great support system even though I am not always the best friend back. I know I can call them and in a second they will drop everything and come to my aid. I often try to convince myself otherwise. It’s a defense mechanism that I have. I build walls, it’s how I am. I have severe trust issues. However, I know that in all reality, my friends love me and would do anything for me. I don’t know what I have done to deserve them in my life.

I have been blessed with the best furbabies in my life. 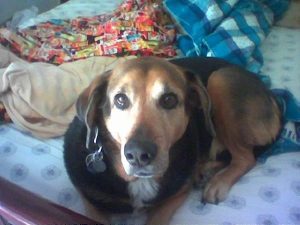 Romie was an 80 lb German Shepard mix that came with the husband. He was big, goofy and lovable. He was not so sure about me since I took his place on the bed when I first moved in, but he eventually warmed up to me and soon loved me as much as I did him. He made the trek to California with us but eventually at age 16, the inevitable happened. He was a good boy that gave us many years of love. 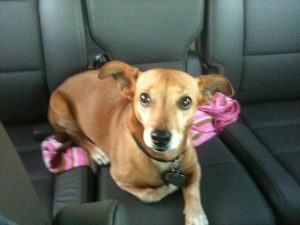 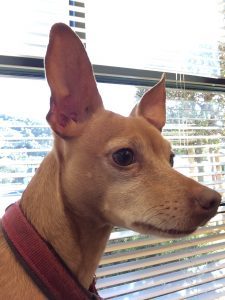 Pappy was the best dog. We adopted him in 2007 from the Salinas Animal Shelter and he won us over with his big brown eyes and his snuggles. He was a Corgi/Terrier mix and 20 lbs of pure love. He had a tendency to mark his territory so all of our rugs were ruined in a few months, but we were willing to overlook it because he truly had us in the palm of his paw. He wanted nothing more than to love and be loved…and to catch that pesky lizard in our front yard. We had him for a wonderful ten years before the cancer took him. He lasted two years longer than the vet said he would and I’m grateful to have had that extra time with him.

Shilo is a princess and a brat and I love her with all my heart. We acquired her when a friend of ours was fostering a pregnant dog. We got invited over for Thanksgiving in 2010 and left with a new baby girl. Okay, not exactly but that was pretty much how it went. She is a 14 pound chihuahua/min-pin/dachshund mix of pure energy and clinginess. She is incredibly co-dependent and wants nothing more than to be in my lap licking my face 24 hours a day. She is also amazingly adorable and such a sweet love. If Shilo isn’t getting your attention, she will demand it and it will be so cute that you have to give in. 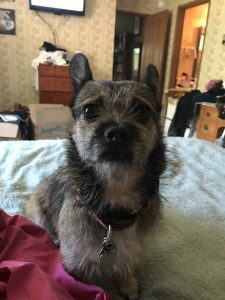 Chewie is our newest addition. We adopted her about three months ago from the SPCA. It had been several months since Pappy passed and we are really a two dog kind of family. We scouted out the SPCA website and picked out our top three choices. The first being a little white dog named Princess. We never made it passed Princess’ room, but we did not go home with her. Instead we fell madly in love with her funny looking roommate “Pop Tart”. She was quiet and loving and a little shy. We interacted her with Shilo and they were indifferent to each other so it was on to the adoption. We found out from my friend that worked at the pound that “Pop Tart” had been adopted out previously with one other dog but was returned because the other dog didn’t like her. How sad! To be rejected twice! We renamed her Chewie and while it took her a while to come out of her shell, she is now happy and thriving in our household. She still won’t play with Shilo, which drives her nuts, but they generally get along.
Being a pet owner is never easy because you know they are on a limited time frame, but the unconditional love you get through the course of their lives is so worth it. I am very lucky to have had some of the best doggies in the world to call my children.

This was all more than I intended to write.  I do have more things that I am thankful for, but I think I will save those to write about another day.  Don’t want to seem too greedy.